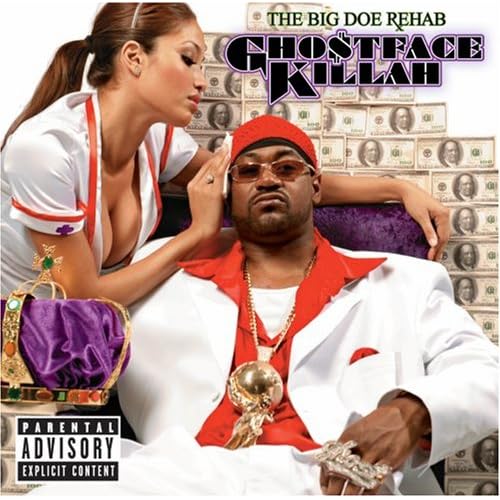 Finally I was able to get my paws on the latest release from the most consistent of all the Wu-Tang clan artists, GFK, or Ghost Face Killah. After dropping two solid albums last year, Ghost ended 2007 with his third release in about 18 months and it is sure not disappoint his fanbase.

Ghost's skits have always been an interesting melange of old movie clips and bad 70's style acting. The Big Doe Rehab is no different, but immediately following the introductory skit, Starks teams up with Beanie Sigel for one of the street hip-hop anthem s of 2008, "Tony Sigel aka the Barrell Brothers". Both emcees get off some of their best shots of the past year on the raucous track. Following that with "Yolanda's House" which features Raekwon and Meth and you can see that the album gets off on an extremely hot start. The three Wu- emcees weave a tale of sex and drug tales with such a vividness you would think that the event was happening in front of your face.

Five songs in and some of the momentum is gone. The songs in between Yolanda's House and "White Linen Affair" aren't bad but they do begin to get repetitive with a distinct lack of originality in concept when compared to some of the other cuts on the album. Speaking of"White Linen Affair" the concept deserves more praise than the lyrics which are mostly a collection of the top artists in the hip-hop community over the past decade, but the concept holds it down wonderfully.

"Ghost jacks the Redman staple "Soopaman Lova" on "Supa GFK" which if you know the Redman series, then you know what ghost's version is about. The obligatory Wu-collective rap song with an absurd topic song "Paisley Darts" comes up about three tracks later and is followed by another story style rap "Shakey Dog Featuring Lolita" where a recurring theme of GFK's verses seems to appear. Though the only song dedicated to female "hit men" Ghost references such women throughout the cd.

Ghost's ornate language is on display on the bonus track "Slow Down" which features Chrisette Michelle and is proff that hip-hop doesn't have to be stale.

This album is a modern classic almost. If this were a first or second offering from Ghostface, it would be rated higher, but at this point in his career, the way his topics are structured is saddening. The street wise politics of the earlier records is missing from the cd, and Ghost instead relies more on mastering the gimmickery his modern peers have barely scratched the surface of. While it is enjoyable and fine to hear Ghost spit his thug/coke/baller rap, one still looks for the humility and humanity of his earlier releases as a way to lead the younger generation. even without such morality in his verses, Ghost still manages to outshine most of the acts of today.