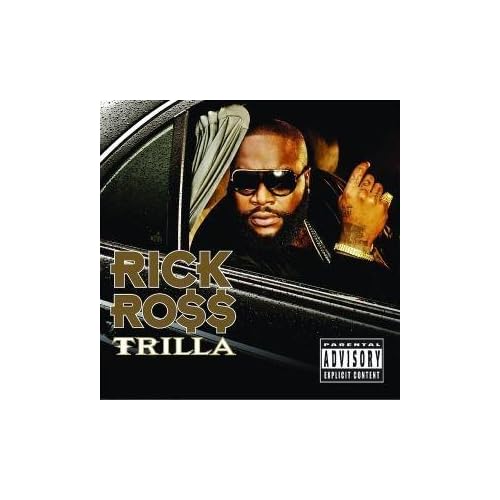 Okay so the first time i heard Rick Ross I just figured he was the Miami version of Young Jeezy. I was slightly wrong, Rick generally has a better flow than the aforementioned snowman although just about everything else about them music wise is virtually the same. The hood I presume has been clamoring for the sophomore release from Ross. Myself, I was non-comittal figuring i could live without it. Alas after being pushed back Trilla is out.

The first single "Speedin" with the pied piper, R. Kelly could have been left off the album truthfully. The aim seems to get radio play by having Kells on the track, the song works less than the Beanie Sigel/ R. Kelly song, and even less than the second single from this album "The Boss" which features T-pain, with Ross doing his usual boasting of being a drug kingpin and balling across the city. (worth mentioning i feel, is that Ross is actually on one of the truly believable characters when it comes to street cred).

on "Here I am" which costars Nelly and his singer Avery Storm, Ross attempts to cross over and capture the "Black Girl Lost" crowd. The attempt covers in that way, but at the same time Ross doesn't seem to come across as inspiring as most artists with these type of songs. Ross seems more gleeful and being able to exert control over a "buss it baby" (my term not his this time). An even worse failure is the lame attempt to show some contrition over past hustling with "I'm only human."

Amazingly Lil wayne only shows up (and shows up the host MC) on one track "Luxury Tax", on which Trick Daddy and Young Jeezy also drop verses. The best song on the album lyrically is "Maybach music" because of the verse contributed by Jay-Z, who comes correctly within a theme you could understand looking at the title of the song while Ross spits a verse that is indistinguishable from the rest on the album.

Thus the fatal flaw for Rick Ross. If you just want to hear the same song about the street his hustle skills, ice, chains, whips, balling and being a boss in the city then I would assume you would be satisfied. However, the album leaves things feeling empty and wanting a little bit more in the way of authentic emotions from Mr. Ross. That is where artists like Wayne, Jay-z, and even Jeezy seperate themselves in a mediocre rap world.