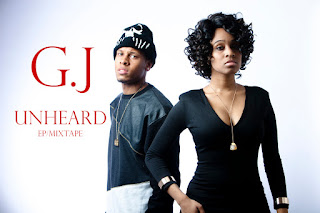 This week we're going to start with a rap/ r and b hybrid song by G.J. . Honestly I know those are intials but it's always an awkward set of consonants to pronounce, like a tongue twister. As for the single I was sent, "Burn" the production is decent but the mixing is slightly underwhelming as the vocals aren't clear and as crispy as I would like. This also comes from listening to their mix tape as well, a touch more treble would help. For this song it's alright, I'm not going to say it's bad cause it's not but it isn't ground shattering either. Also listening to multiple songs, She is the stronger talent and the rapping elements need to go away or be ghost written. They just don't really work. Overall, with some more work and development this duo can improve and find a place but they need more creativity with the male singer's parts to make it work for the best.

Next up is Artist Noir who has some tracks I don't care for to be sure but also some that make me go ok, he's doing something here. The big thing is I think he can make it. As I sometimes can tell, he has the "industry sound" which means what he is doing sounds professional from the production and mixing standpoint as well as the content and arrangement. It's a nice set of talents and skills that put you into that comfortable pocket. The song he sent me was called "Pussy" and it's a pimping song, which I can say is a recurring theme for him, however the song that I think is what should be pushed is "Mirrors" which has too much auto tune for me but looking at the game it's right there where it could break through.

Now I'm not normally a fan of overseas rappers. A lot of times it's the accent and it sounds really off to my ears. I must say though Big Ribzy isn't that bad to me. The UK rapper drew me in with the song "Iceberg Slim" the intro to his new EP which is called "No Games". Maybe it's his inclusion of things I take as typically American like Lean but it's pretty cool. For my less mainstream music fans it might be worth a listen or two.