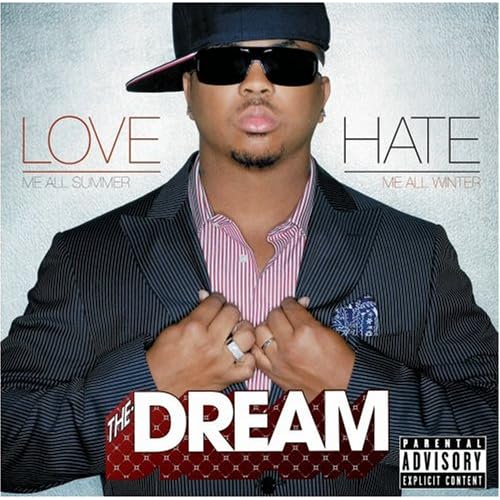 So back to the r and B tip I go with the latest sensation (also from the A) The Dream. The writer of Rihana's smash(?) Umbrella, and the song "Shawty is a ten (the shit)". I must say it's a trend of people with questionable singing talent to make it big lately, from Chris Brown, to T-pain. The Dream is just another one in that mold, only without the dancing ability of Chris nor the weird likability of Pain. He does his bets however to work with what he's got.

I've never been a fan of r and B singers cursing and getting extra vulgar in their music. It has always been to me like hearing a poem, not straightforward and more ornate and things covering the true meaning that you have to decipher. So the first two songs turn me off for that reason, the first being "Shawty is the Shit" which is terribly annoying in it's own way. "I luve Your Girl" is alright but still adds vulgarity waay too early in the album.

After that however, The Dream decides to show what makes him stand out with "Fast Car" which sounds just like a Prince song- Purple rain a little bit, with the use of the horns and piano riffs. "She Needs My Love" is crowded with a lot of sounds in the background of the hook but manages to sound alright when it gets down to it.

The other thing that holds the album back other than Dream's voice, is his constant use of the "Aye" ad-lib on almost every song. Once or twice after the initial single it would have been find to hear it, but when it becomes part of every hook it becomes monotonous and shows a lack of ingenuity and imagination.

Totally, the Dream has some good ideas and some decent songwriting on songs like "Purple Kisses", "Nikki", and "Falsetto", but then he missteps into boring territory with "Ditch That" and "Luv Songs". And that isn't even to mention the terrible collab with Rihana "Livin a Lie", which i would be doing if i wrote that song sounded good.

While the Dream has enormous potential as a songwriter and the ability to make singles and show some uniqueness, his downfall is the fact he wants to be getting his shine as an artist too. some people are better off in the boardroom and his voice becomes an arduous task to listen to after a short while.