Busta Rhymes has been through a lot. He has survived more labels than any other artist and is currently on some version of the Young Money/Cash money imprint. Now I have doubted whether or not this would be a beneficial move for one of the most iconic artists in hip-hop. Well things have come to fruition sort of with this full album release. However, you won't find it in stores or itunes, in a unique development, Year of The Dragon is available on Google Play as they attempt to build up their library of offerings. An interesting concept so it doesn't cost you anything, so go and sign up and then download it in case he is getting paid by the unit while I review Busta Rhyme's "Year of the Dragon". 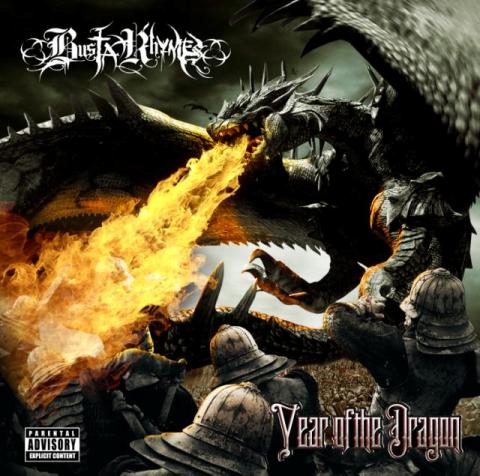 The album starts off feeling like a throwback with "I'm Talking To You" which has the rock/rap fusion going with the drums and guitars before Busta takes you into the dungeons. It is followed up by what would have to be the 'single' which features Trey Songz and Rick Ross on "'Til we Die", where Busta breaks out his slowed down serious flow. This songs has a good balance on it. On "Do That Thing" you would swear Busta had channeled E.L.E. for the track which sounds like it was lifted from that album. "Make it Look Easy" features Gucci Mane and has busta rapping over a well used hip-hop sample though it s more annoying than anything, but Busta always has those songs.

Lil Wayne is the feature artist on "Pressure" which is about nothing but it just has that Busta feel to it. "Love-Hate" has Robin Thicke on the chorus while Busta talks about how he is love but he hates the woman he is with. It's cool, but not required listening. "Grind Real Slow" is right up in Bussa Buss' wheel house with a creative hook in the way it's put together even though subject wise it is very simple. Of course, by now you should have jeard "King Tut" with J. Doe and Reek da Villain.


Busta reaches out to Harlem and Killa Cam on "Sound Boy", while "Doing it Again" uses the 'Round and Round' samples and features Reek and Chanel, who handles the chorus duties. It's album filler and for the first real time, Busta goes to the islands with "Wine & Go Down" where he goes back and forth with Vybez Kartel. "Movie" is trash and happens to also feature J. Doe, but Busta makes up for it on "Crazy" the trunk rattling bully rap that Busta is great at. He ends the album strongly with a feature from Anthony Hamilton and Maino on "Bleed the Same Blood" which just has that dark flow and Maino brings his raw street style to the track and it just is one of those true grinding it out type of songs.

This was an unexpected drop for me and it is very solid. In fact, compared to a couple of the more high profile albums this album shines a little more. I wish it was a wide release and maybe out two years ago where it could have really had an impact but this album doesn't have Busta reaching too far out of his comfort zone to be something that he isn't. It truly is a throwback to E.L.E. or Genesis so if you like the dark brooding feel on those LP's you would probably like this. Busta isn't going to really get the young generation with an album like this, especially devoid of those big party bangers he always happens to have a knack for creating, but it is solid, vintage Busta Rhymes nonetheless.