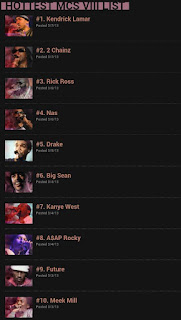 So of course the always controversial MTV's top ten hottest emcees of 2013 has come out and generated plenty of controversy as is the goal. It's a discussion point, and as that' I'm fine though maybe I should expand my circle cause everyone always says they don't pay attention to these certain people who make it. For a recap just check the image to the left.


At first I was totally against the bulk of the list but after settling down and thinking I have to remember that "hottest" is a very subjective term. For instance Nas should be on the list because people in my age range were looking for something like "Life is Good" from him. it was such a solid album that Nas doesn't have to do all of the features the others do in order to be impactful and in fact he sold much more than some of today's popular artists proving that he still has staying power. But that leads to another question, does a solid album that was the talk for a month mean more than someone like Future or Big Sean who didn't sell squat from their disappointing solo efforts but who were on several top singles during the year? Once again, hot is a subjective term. For me that means a lot because even the people who claim to like Sean don't support him on his own, only in doses with others.

Now I still think that Ross and Drake should be numbers one and two and I am not a fan of either artist, however, they both had a tremendous impact and are artists you have to check for even if you don't like them. Drake in particular was on songs from everyone except for Nas pretty much and had the term #YOLO getting on my nerves. I have no problem with 2Chainz making the list though his album sucked even more than was expected he still had smash singles.

After that I would have had Meek Mill because up until "Dreams and Nightmares" actually came out he was the most talked about artist without an actual debut album. He had singles galore and even shut down his features on Wale and the Self Made compilation. The actual album had some decent songs but isn't in heavy rotation beyond a few tracks. So he and Asap Rocky would fill out the top half for me cause though I don't get Asap myself apparently people like him. Then I would bring in Kendrick Lamarr whom I do like as an artist but I don't really see him as an artist who you wait for a killer verse on a remix or most tracks and thats because of his style.

Nas would drop in at 7 which is good enough for me. I would then put the auto tune mess that is Future at number 8 and add French Montana into this list. While French hasn't dropped an album yet, he had "Pop That" as a single, came out with "Ocho Cinco" and had enough features to keep his name in the streets while looking like he was half assing his career. How Knaye made this list I don't know cause he hasn't done anything this year worth being on it. Cruel Summer was a flop, he didn't do an album and only a handful of weak features. Big Sean is one of the worst rappers I have every heard so I will never put him on a list for a positive reason so I would end my top ten with Nicki Minaj because she is always popping at this point. She can literally fart on a track and be in the top ten. Honorable mention to Wayne and Pusha T for their contributions which I think were more than Kanye who went on a rant trying to disrespect Sway for only being at number 7. I don't want to glorify his bitch ass ness any more so we will leave it at that.

At the end of the day, this list has to be more fun to talk about because it means nothing overall. The idea of hotness is weird because being forced onto features like Ace Hood was two years ago doesn't mean you're hot. I skip Big Sean's verse on Clique every single time so his presence doesn't do anything. Future couldn't move his album but on features with hooks he helps to make the song for some so is he really hot overall? I would say that takes away from it.

While it is refreshing to see a Kendrick Lamarr atop a list like this for what old school skills he brings to the game, I just don't see where he had the overall impact to change the game as much as this kind of list would suggest. Maybe next year there might be a move in the tone of the game but until then I think it's an over estimation of what Kendrick has done thus far, but good luck in the future young man. How do you feel about the official list or my own?