TI and Weezy Can Tip save him?

Now after going through all of the hoopla surrounding Lil Wayne's seizures and subsequent hospital stay, T.I. took the time to not only chastise TMZ for what he considered to be irresponsible coverage of the issues he was going through, but to also announce that the two would be going on tour this summer. It's all good for most aspects of that I guess, i mean these are the two leading icons of the southern rap movement today who both have a certain amount of respect and or following. However, both are pretty much seen in different lights.

T.I. is a respected elder statesman who has done time multiple times, been in the game a while and is known for being a good role model even though he has had his own personal issues. Wayne is seen as a talented lyricist who is the leader of a lost generation who pretty much only promotes negativity such as drug use, unnecessary violence, and objectifying women. Yeah pretty much all rappers, but unlike most, Wayne seems to lack the redeeming qualities most artists attempt to portray at least on occasion. He is unapologetic in what he represents and while that can be commended the fact is, what he represents isn't something I can get behind or encourage.

This leads me back to Mr. Harris, who is an example of how to balance both worlds. He can still do a song like "Addresses" and still come across as a good father and husband. This leads to a guy who has damn near killed himself twice so far due to drug and alcohol abuse and the hope that TI can be a positive influence to bring out more of these qualities in Wayne. I'm not going to act like I know how Waynes acts around his children, but we know is he has several, about three of which are under the age of three and with his travel schedule time around them has to be minimal. Then there is the fact that the majority of the time he is seen, he is carrying a cup or high. Then there is the constant promotion of drug usage and his over sexualized lyrics. Hell, we have seen him with his daughter onstage while he performs "Lollipop". 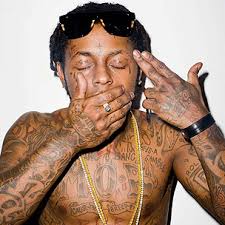 I understand most people who are Wayne fans will say 'He shouldn't be a role model, a child's parents should be'. They are right but unfortunately it doesn't work that way. Popular culture has an enormous impact on the lives of the youth and Wayne is one of the current leaders of that. From his tattoos to his piercings and style of dress, more people copy and follow him, subconsciously or not and so what he says and does has a large effect. There are few people who have the cachet to speak to him frankly and suggest changes in behavior, T.I. is one of those people.

T.I. has been able to transform himself from  just another felon who happens to be an entertainment to someone who is able to be shown as a pillar of rehabilitation and the only positive person on the vh1 lineup. He has several artists under him enjoying success in different areas of the musical spectrum like B.O.B. and Iggy Azalea. He is known for having responsible reactions to situations and not flying off the handle.

This isn't just about the detriment to the urban society at large though, it's also about Wayne and his own life. Wayne is on the path to serious destruction. The drug use has gone overboard and at times it seems as if the only thing dude has left to due is to die young so he can be considered a legend like River Phoenix or someone. There is more to life than sex, drugs, and alcohol and hopefully at some point Wayne can realize that and not destroy himself or anyone else's life in the process.
Labels: health influence Lil Wayne positive role model T.I. tour