So after what some would consider a long delay, Lupe Fiasco's Lasers has finally hit shelves and moved a huge number of units for him and Atlantic Records.This comes after a long protracted fight with the label over release dates and even his first single which used to be "Nothing On You" but ended up as the lead for B.O.B.'s debut album and is all for the better. Now I'm not a fan of Lupe, to me he blends the skill and sometimes hypocritical "we consider him smart but is he really?" characteristics of Nas, with the narcissism of a Kanye which isn't a great combination.

Listening to the album I am very confused as to why Atlantic wouldn't want to put this out unless they just got tired of dealing with the artist but even that doesn't make sense. From the opening, "Let it Go" featuring Sarah Green sounds ready for rotation at top 40 pop stations. In fact the entire album sort of feels like an extended "All Of The Lights" from Kanye's latest. This first song however is so muted and subdued that after 5 times of trying to catch the verses I had to give up. I just couldn't tune in to it. "Till I Get There" is more of a Lupe song, sounding more like the one he had about the robot. It has a simple singing chorus and a feel good vibe. 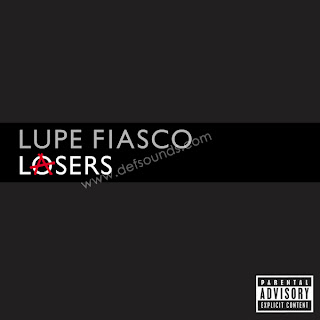 "The Show Goes on" is another one with a big feel and a cool guitar riff but the chopped up flow Lupe has to use on the track can seem annoying, but it fits right in with something out of the Black Eyed Peas catalog. This is especially evident on "Beautiful Lasers" which features MDMA and has a somber mood to it. "Coming Up" also featuring MDMA, who was heavily involved in this album, breaks up the feel sonically during the verses but the pseudo-rock-pop hook ties it in nicely with everything else. "State Run Radio" with Matt Mahaffey, had potential to deliver a big statement but falls slightly short, though it is still one of the better songs on the album.

"All Black Everything" is more of a typical Lupe song where he talks about the world being opposite and what the result would be although none of them make sense taken together. The third verse is the best one. "Never Forget You" with John Legend is also typical. "Break the Chain" is another pseudo-hip-hop song and features Eroc Turner with a Green Day or U2-esque hook. This is probably my second favorite track. "I Don't Wanna Care Right Now" also with MDMA is Lupe's official dance track and it's Like Kanye and Will.I.Am made a beat and this was it. The most out of the box song on the whole album features Trey Songz of all people. "Out of My Head" is more of a traditional r and b/ rap mash-up and thus sticks out amongst all of the pop-rock fueled tracks on the album. "Words I Never said" with Skylar Grey is also straight classic lupe and while I might not agree, I think this is one of the more natural fits on the album.


At the end of the day, this album falls perfectly into the Kanye created mold of pop-hop. Lupe forces in his political views but more often than not this album feels like someone copied the Black Eyed Peas blueprint and forgot to give a singer like fergie actual verses. It didn't feel like a Lupe album and for me, the tone was monotonous and grew annoying after a while. The constant distorted singing, big beats and simple rap styles fit Lupe but he just isn't as smooth as I would like on some songs and I kept tuning it our, like the noise of an engine going down the highway. It's a good album, but not one I'll be listening to often.