So Rick Ross seems to be on his way to creating the next movement in the normal rotating wave of popularity in hip-hop. What this should mean is that Young Money- if you're not Nicki, Wayne, and maybe Drake, it's over before it begins. For the artists who have been signed up and will be distributed by Warner brothers, Pill, Meek Mills, and Wale, this could be their chance to shine or fade into obscurity (just ask Jae Millz and Cadillac Tah about that). 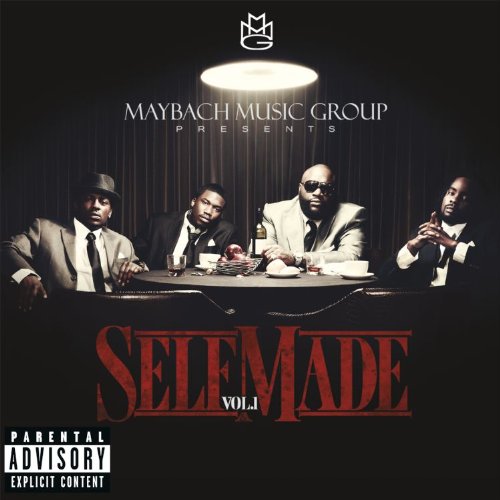 The first song, "Self Made" might just be the best on the album, with Wale, Meek Mills and Pill all capturing what makes them similar and a force to be reckon with, the idea that they have been underestimated until Ross took notice. The hook is covered by Teedra Moses- I know where did they find her at? The first single is a song that is terrible to me, "Tupac Back" where Meek Mill fails to compare himself to Pac favorably, relying on superficial reasons to make a 'connection' with a standard Ross hook on a standard ross beat. "600 Benz" is a Wale song that was out a while ago, the track-same as everything ross has put out the past 2 years and Wale doens't particularly fit on the track, his flow isn't smooth enough, while featured artist Jadakiss fares better on that end, his content has been lacking for quite a while now.

"By Any Means" once again has the three main signees of MMG sharing the song to themselves where they attempt to show how they relate to leaders like Malcolm X in dope terms. 'Fitted Cap" features J. Cole who has the best verse on what amounts to the hood version of Nelly and Jermaine Dupris "J's". Pill shows his true worth on "Please Don't Let me Go" which also features...fucking Gunplay who is terrible, just plain terrible, at least he goes last so you can switch the track. "I'm a boss" is a Meek Mill song and I can't figure out why he is trying to do his best impression of Ace Hood, yelling, going off beat and generally not saying anything, though Ross actually drops a verse on this one.

Meek Mill, Ross, and Wale hand "Pandemonium" which is more floss rap from Ross and Meek Mills doing the same while Wale flashes his potential yet still regresses in an effort to sort of fit in which he has the tendency to do. "Play your Part" is just telling the women to stay in their lane and Pill follows with a stripper song "Ridin' On da Pole" which shows the desperation of coming up with topics for the album. French Montana is on "Big Bank" and he does nothing to quell the curiosity I have as to why people actually like him. Meanwhile on "Rise" Prince Cyhi and Currensy get the featured slots and Prince provides a new sound with his vocals and the song does tone down the album for a moment. the final song on the album "Runnin' Rebels" is the equivalent to the first joint, wrapping the album up neatly, even featuring Teedra Moses again.

If you're a Ross fan, and most people are these days, there isn't anything outward to make you dislike this album. If you're slightly more discerning as I am, the repetitive beats and hooks make this album a pain to slog through. The irony is that Wale speaks about wack music yet he seems to be on one of the worst examples of that in terms of projects. Pill probably shows the most depth even over Wale who seems to just be trying to prove he has street credibility throughout the entire collection of songs. If there was anyone who would be trying to stretch the boundaries of street fueled crack rap from the South this album could have been better, but as it is, that is too much to ask for and so its more of the same.