While talking about all of these phrases today's artists are coining I ended up leaving out the one that has become the most prevalent in the past few months, YOLO or "Tou Only Live Once" which was coined by everyone's favorite underachiever, Drake. Apparently this is the new motto for  generation of youths. In some instances, it isn't a bad idea.

Most of us African Americans don't like to experiment or try new things because it may seem odd or out of character for 'us'. this is where the idea can be helpful when we talk about experiencing new things or having some different short or long term goals. I would love to see someone say YOLO - Going to get my Master's yay! Or how about 'Decided to get my passport and visit Egypt - YOLO". Those would be the type of big undertakings worthy of the phrase. They would have both the short term benefit of having something exciting at the moment and also provide a lifetime of memories, and possibly set the stage for future success and endeavors. 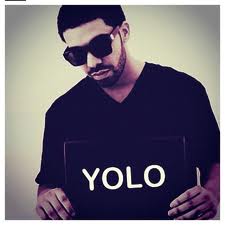 Instead, what YOLO has come to exemplify is shallowness and recklessness. Going "YOLO" because you're in Miami at Wet Willies and planning to try all of the alcoholic slurpees at once isn't impressive. I mean it's cool if that's what you want to do but that shouldn't be the extent of your ambitions. Another example, "Bout to down this whole bottle of Ciroc #YOLO. Why must we break things down to their most meaningless forms when they could be so much more impactful and far reaching?

Look I know I only live once but every day that I live, I live like I have another. That means I'm not going to mortgage the future for one ridiculous thing today, pace yourself. I also want to remember and share the things I do today so I'm not going to be so reckless as to behave in a manner that won't allow that to happen. You only live once is absolutely correct but the fact is you cannot waste this one life trying to have swag, get fucked up drunk constantly, and have the latest gear, all of the time. You shouldn't even promote the image that this is what you do especially if it isn't true.

I guess in the end my irritation stems from people who fool themselves into thinking they have some type of outrageous lifestyle where something is liable to happen to them so they go to the club scream out this saying and toss their gas and electric money on the bar for a bottle just so they can have it brought to their table with the sparklers. Or the dope boys who are supposed to be in the streets because they don't have any options to support themselves and their families yet at the end of the week they are more beholden to the streets than a normal job because what they just did was toss all of their money on 'Chyna" at the strip club because everyone else was doing it. You only live once so make sure you live your life and not anyone else's and you take stock of just what it is you would like to do. It's only one life but it doesn't have to be a short one because the opposite is true as well, you only die once too.
Labels: catch phrase Drake gimmicks goals motto phrases the motto YMCM YOLO