So a couple of years ago I postulated that Ace Hood might have been one of the most pointless rappers ever, since then, due to his struggles and direction from DJ Khaled to make a hit, Ace has seemed hungrier and put out music that is much better than his previous efforts. Point blank, at put up or shut up time, he put up and proved me wrong. However, while he has had a banging single, I don't think most people were prepared for his latest album to drop, especially after the hype of June. His newest album, Trials and Tribulations may prove to cement him in the game or be forgotten amongst the excitement of Jay-z affiliated domination. 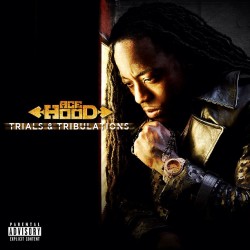 The album starts with a testimonial skit before leading into "Trials and Tribulations" where Ace Hood goes into his struggles, both in the recent past and even earlier. He comes with his trademark energy over a really raucous beat. Even with his style, what has changed about Ace is the way his passion comes through on his verses. "Another Statistic" finds Ace trying to be more political yet street, think Jeezy on the Recession, and not just when channeling the name of Trayvon Martin as he does in the first verse either. "Before the Rollie" with Meek  Mill is Ace talking about keeping the same old friends with him when he was struggling as now. The hook is kind of weak and the beat is decent as a change from the bass heavy production of the start of the album.


"We Outchea" is a bit of a relapse into average trap rap with Lil Wayne but it isn't all that bad. It's right in the middle of the zone of acceptable rap these days. "We Them Niggas" is worse though I think people will be rocking this due to the slow syrupy track. Chris Brown handles the hook on "Rider" where Ace describes his ideal chick and what she is looking for in her dude. He gets back to his more positive aspirations on "Hope" as he talks about feeling like he isn't going to make it and what he needed in his heart to make it. This is one of the better songs when it's all put together.

"Pray For Me" has Ace telling people to pray for him to not go down the worst possible path and really have to resort to the normal street shit. It also serves as a warning to anyone who thinks he's gotten soft on the streets since he has become successful. The single was "Bugatti" with Rick Ross and Future and it was a strong lead. "The Come Up" with Anthony Hamilton is the classic collab with an ultra soulful singer about the grind and come up in a positive way. "How I was Raised" is about how real Ace keeps it because thats how thorough he is. It's generic rap about going after money and 'being real' compared to others. The beat is pretty tough though.

"My Bible" changes the sound of the album with a rock/gospel/inspired track that breaks away from the strict trap formula Ace has previously stuck too and it works wonderfully although it takes too long to fade out at the end. The album in general ends with "Mama" unless you have deluxe which includes the Bugatti remix and two other songs. This is one aspect of his life he didn't really cover previously though he did illustrate his struggle at times on his last two albums.

Overall Ace has settled into a nice place in his career. He is still really young as an artist and he is already four albums into his career. While his last two have shown growth they have basically covered the same territory thematically. Unless he plans to continue and become more political I'm not sure where he can go musically and still have growth without taking some time off to experience life. However, looking at today, Ace Hood knows what his fans like and expect and that is pretty much what he delivers. The beats are banging and his lyrics are a step up but it isn't a classic.