Let's start this week with Partners in Irony, a duo from Columbus Ohio who dropped their video for "Love and Happiness". The group is going for an old school feel with this song and are a lot like some of the new young hipster groups dropping these days. I don't mean that negatively, but what I do see from these two is a lot of youth. While not straight raw, they need some finishing and to kind of grow up a bit and polish themselves. They look to be in-between being normal and really becoming artists in the way when you see them it comes across immediately.

This will extend to and help their music and rapping as well making it more consistent. 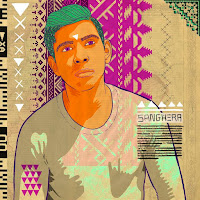 I got this track from an artist who goes by Sanghera called "Hold Me". The song is a laid back track and it reminds me of the late 90's quiet storm radio intros you would hear at 10pm when the slow jams took over local radio. The flow can seem a little rough and the hook and female vocals aren't mixed as well as they could be in my opinion to truly blend in but I still seem to like this track. Now he also submitted another song called "In The valley" and it's not a great ground breaking song but it's catchy and I like it. Sanghera has a little something here although I can't put my finger on it.

We have to finish up back in NY with Bronx rapper Joey Sucio and his submission "Off The Rocker" which is classic hardcore NY hip-hop, but the good kind not the out dated BS. The song is tough and the flow is on point the entire time. Looking and listening to some of his other songs one thing that Joey has to do to make it further is find a way to break up his voice and cadence sort of how Kendrick lamar finds ways to make it so that you dont get tired and start tuning out his voice.