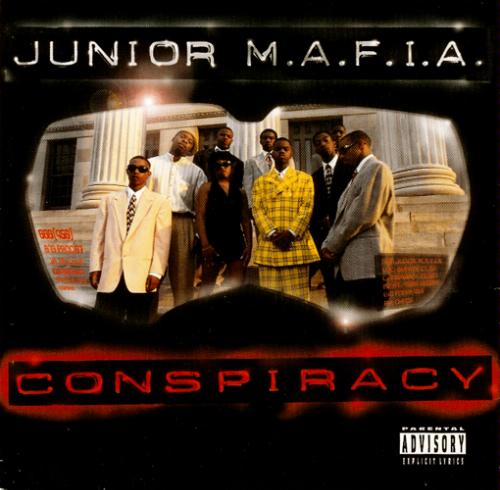 Merely a year after Biggie released his debut album, Bad Boy was on top of the world and it's feature artist, Christopher Wallace was making moves to extend his reach. Lil kim was bubbling and along with partner Lance "Un" Rivera, a deal was secured at Atlantic for Undeas Entertainment which then signed the rest of the Brooklyn star MC's crew Junior Mafia and released their only crew album, "Conspiracy". Made up of the Snakes (Larceny and Trife), The 6's (Lil Cease, Bugsy, Capone, Chico, and Nino Brown) and MC Klepto and Kim. The album was to begin an era for Biggie but it wouldn't be the success it could have been.


The first song "White Chalk" is designed to be a grimy track that just appeals to the most hardcore with a dark and heavy beat and typical NY crack era rhymes about drugs and violence. The hook which samples both Method Man and Biggie vocals is cool although the verses are a little awkward with how they begin. They aren't bad but really generic. "Realm of Junior Mafia" samples "UFO" which is well known and been done many times but it sounds way too slow and Biggie comes on to spit and give a short verse but it isn't wowing.

The Singles from the album were of course "Player's Anthem", "I need You Tonight" and "Get Money". "Player's Anthem" mixes several samples together with Biggie on the hook and the first appearance on the album from Kim. Big's verse was the best on the song. "I Need You tonight" starts with boring verses from 'The Snakes' and a hook from Aaliyah and  a standout verse from Lil Kim where she got everyone's attention with the Vanessa Del Rio line - who also appeared in the video. But the biggest single was "Get Money" which was only Biggie and Kim, kind of showing who had the charisma out of the group.


"Crazaaay" feels like a Mobb Deep track actually and isn't bad. "Back Stabbers" is a Lil Kim vehicle where she talks about the people you can't trust over a simple use of the O'jays classic. "Lyrical Wizadry" is alright as is "Oh My Lord". the final song is "Murder Onz" and it's just more "stuff" i guess.


Listening to this album kind of shows the issue a lot of rap albums in the 90's that never really bubbled had. They are one note, with lackluster production and no real direction. the album doesn't go anywhere, it's just some songs about the hood that don't have any feeling within them. The verses are just lazy and everyone blends in together and it just isn't good. Amazingly, the album managed to go Gold showing anything could sell back in those days.