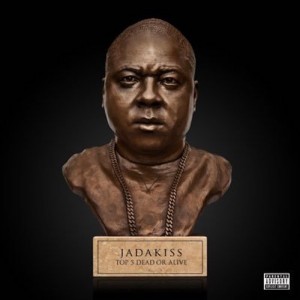 Jadakiss to me is a highly polarizing rapper. I cannot deny that he has some skills and there are some who would put him top 10 or even top 5. That seems to have gone to his head if you look at the title of his latest solo project. For me, Kiss isn't full or consistent enough for me to consider him to be an artist of that caliber. As a member of the Lox he has both been around for a long time and put out quality songs but there is nothing about him that makes me clamor for him to drop records. The question is can this new album change my mind?

The album starts with a quintessential NY rap sound on "First 48" where Kiss starts talking in his normal way to give love to the streets before going into a long verse that is designed to show off his skills and there are some good couplets but also some that are just filler and on a track like this with the pedigree that he has and is trying to reinforce there should have been more wordplay that's intricate. "You Don't Eat" fits in with the Jada narrative as he raps about how to survive or make it in the streets, how to get it or 'eat' as it may be. I like the production on the track. The thing is that Kiss is so monotone and face it, boring at times he makes songs like "Man in The Mirror" which has a terrible corny hook and uninspired bars like "You can do the math on that and do the science too".


Now it wouldn't be a kiss album if he didn't have a track where he goes back and forth with Styles P, which occurs on "Synergy" and it's just old. I mean the lyrics are simplified so much to make the back and forth seamless and easy to mix and the attempt to have an epic beat falls a bit flat. I do like "Ain't Nothing New" however, which features Ne-Yo and Nipsey Hussle and a track that seems to be balanced well and also reminds me of 70's black exploitation flicks with its bass line. "Kill" with Lil Wayne reminds me a little bit of the Rick Ross and Wayne song "John" and I don't like the lame hook again and Wayne is alright.


Swizz comes through on "Jason" and he tries to mix in some of the political phrases of the past year, yet talks about having a gun on him. I guess it's supposed to be a juxtaposition or something they consider artistic but it's just trying to cash in on what's going on and if Jada had said something political maybe this would have made some sense. "youthful Offenders" had potential but Kiss is extra lazy with superficial descriptions of young guys in the hood who end up in the system and doesn't get into anything deeper than that. The hook is generic Akon as well.


"You Can See" with Future, and "So High" are just filler to appeal to the southern and smoker demographics really. I didn't like "Critical" with Jeezy. It just didn't feel right to me. "Cutlass" actually works better for that required southern joint. The beat is infectious as is the hook. "Realest in the Game" with Young buck and Styles has too much going on for me. "Rain" is average and "One More Mile to Go" isn't bad.


Listening to Jadakiss is very trying for me. His voice while once  cool because it is so unique has become a bit grating because he doesn't do anything to break things up, no new flow patterns, inflections, or unique song constructions to help it out. Topically I don't expect much, and didn't get much from Jada. It is somewhat disappointing that nothing has really changed or improved in all of this time. The numerous skits on the album were annoying because they were neither funny, nor added any atmosphere and his trademark ad lib is overused ridiculously. For Kiss, to really seem to believe he is a top 5 rapper dead or alive is a sign of both is confidence, yet a large amount of hubris as well. There is no way reasonably a guy who cannot string together more than 2 quality verses on a song can be considered top 5. I know there was some buzz and a lot of hardcore hip-hop fans just love Kiss but this record won't get more than three spins max before it gets moved to the back of the bin. Give me an old Lox album over this any day.