So we all remember Kreayshawn from early last year when her song "Gucci, Gucci" bubbled up and became a short time sensation that brought attention to herself and her white girl mob partner in crime V-Nasty. They weathered a small controversy over their use of the 'N-word' well, more V-Nasty than Kreay, but have yet to escape the feelings that they are just creations by the machine. Some circles don't respect the girls, but lo and behold, here is Kreayshawn with her debut album, Something 'bout Kreay. 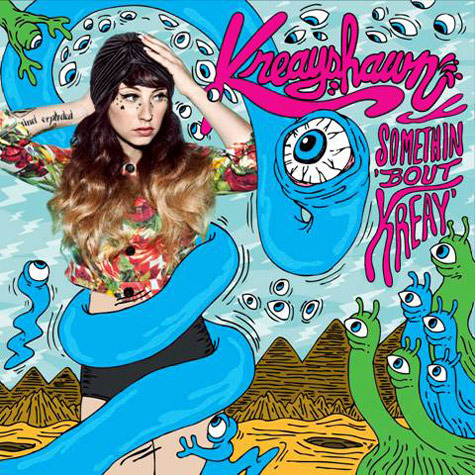 The album starts off with a 80's feeling throwback hip-hop track with "Blase, Blase" where Kreay covers the topics of getting money despite the haters and having fun. It's amazing that "Gucci, Gucci" still ends up on the album since it was out so long ago but it's here. The actual single from the album was a video I saw a while ago called "Summertime" which features V-Nasty. "Ch00k Ch00k Tare" which features Chippy Nonstop is another about nothing smoking type song. "Left Ey3" is an homage to the late Lisa Left Eye Lopes of TLC and the incident where she burned down her boyfriend's mansion because she caught him cheating. The second verse isn't bad as she uses the names of some infamous women caught up in criminal activity.

Kid Cudi is a guest on "Like it or Love it" which is a weird song like Kid normally produces. Kreay sort of remakes the JJ Fad classic 'Supersonic' on "K234ys0nixz" but it doesn't have the quality of the original. "BFF" is out of place, even though they position Kreayshawn as an amalgamation of a bunch of different things. She is singing on it but Kreay's style is more of the type who would make fun of this type of song. "Twerkin" with Diplo and Sissy Nobby is a dance track aimed at the rave crowd.

Kreayshawn also shot a video for "Breakfast (Syrup)" which featured 2Chainz. This song also seems old for the album's final cut and this song about smoking and drinking isn't exciting and even the hook manages to be tired. "Go Hard (La La La)" also doesn't quite fit. "The Ruler" is in the perfects tyle for Kreayshawn as it is slightly tongue in cheek but it's a dumb song. I do like the hook though. I was also confused by "Luv Haus" which wasn't a good fit with the image Kreay has cultivated.

I don't expect much from someone like Kreayshawn because she is just a gimmick whether she knows it or not.Her style and look make her an interesting character and characters can always be slapped on to lunchboxes and etc. This is an example of that, she doesn't ever bring much different to the game. Gucci Gucci was fun when it came out, but too much of the album is about smoking and getting money, but no real moments that carry out that fun feeling. It's all too contrived and the ultra-pop songs just throw the album for a loop.