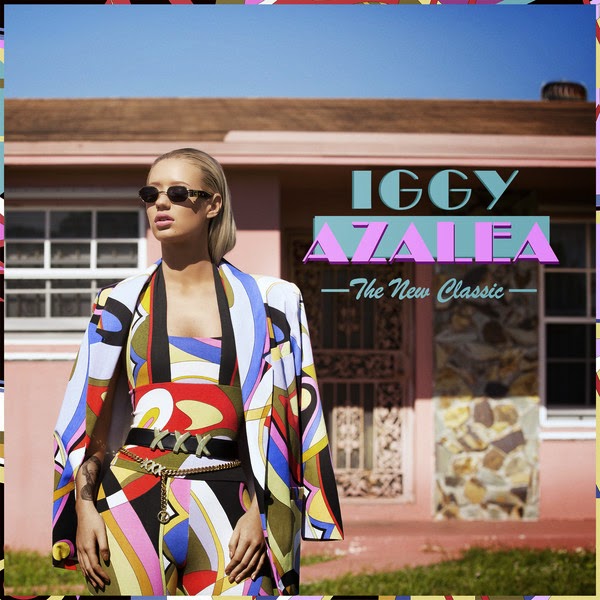 Wow, what a long journey to this point for Iggy Azalea, and that's just the part that the public knows about. I mean I first heard Iggy at least 3 years ago with the raunchy single "Pussy" and that really started her buzz and upward trajectory. She signed with Grand Hustle in some capacity and yet even with the endorsement of TI who at the time was one of the hottest, Iggy couldn't actually get the album finished and released. Thanks to her looks, (I mean she is white, yet still exotic as an aussie), tenacity, and I cannot forget her creativity and some creative management, she has been able to stay visible and relevant throughout all of the turmoil and finally, her album, "The New Classic" is finally going to see the light of day.

Let's start with the songs that have been out but still made the cut for the album, like "change Your Life" which features T.I. himself. Song isn't about anything new or great but it's a decent cut. One thing that happens on plenty of her songs, is that they aim for pop and club play with a dance break down somewhere within the track. This song is more known for Iggy's sheer top in the video. Then there is "Work" where Iggy talks about her journey as a 16 year old from Australia moving to the US to pursue her dream. This song carried Iggy through most of last year. The latest of these singles is "Fancy" which features Charli XCX who reminds me of Gwen Stefani. In fact this song reminds me a lot of 'Hollaback Girl' from a few years back."Bounce also was released too and is a straight up club track.

"New Bitch" was also released but it didn't bubble like a new single. This is about being the new woman and her relationship with the exes, in the adversarial nature though. It's a song I guess some women will like. it's cat fight-like sort of like what you might hear on one of the Mona Scott shows. "Walk the Line" which starts the album is Iggy's trials and dealing with rumors and doubters. Her speedy flow on this one reminds me a lot of mentor T.I. . "Don't Need Y'all" is more of the same about doing things solo. The flow when she tries to slow it down and make it catchy sounds a little weird and some of that is because of her tone and accent. "Goddess" is a pretty generic and uninspired song but it isn't bad. It just exists. Wat it might do, is bump in top 40 clubs and be a good performance vehicle for Iggy. "Impossible is Nothing" is supposed to be an uplifting song about achievement and dream chasing. Seems formulaic.


"100" featuring Watch the Duck , ehhh, it is what it is I guess. Rita Ora is the guest on "Black Widow" on one of those female empowerment tracks. It has a really big sounding hook then goes into a simple track when Iggy's verses come on. "Lady Patra" features Mavado as Iggy aims to get some burn during reggae playlist portions of the nightlife. The hook is absolutely ridiculous though. "Fuck Love" is a generic song about getting money over love cause she doesn't need it. This is all club aimed right here. "Rolex" is a more downbeat song as she talks about wasting a time lost on a relationship. The album ends with "Just askin" which is just another track.

At the end of the day, "The New Classic" isn't a classic. It's a decent debut but it suffers because it is considered a hip-hop or rap release but it's more of a dance-hop album. Many of the songs have been aimed at play in the club and there are quite a few songs that are old and have been out for a long time. It's not all of her fault if the album has been done and being shopped but maybe some new material should have been added and something else removed. The beats are all the same and are pretty simple during her verses. I would have liked to hear something heavier to break up the tone. I still like "Work" and there are times she sounds too much like T.I. for my liking. The one thing is that this isn't an overly 'female' album in my opinion, and by that I mean explicit sexual female lyrics that turn male listeners away, but along with that this is indeed a pop album so men won't be riding around bumping anything from this in general. In fact more hardcore female rap fans won't be buying this either most likely. It's a shame because it seems like they took the aim of the white female top 40 listener and said forget everything else unless it's incidental, and from her first single Iggy kind of proved that she was capable of making a song that could relate to that audience. She will suffer from the same doubt and lack of credibility if she gets another album shot because it wasn't kind of addressed this time out.