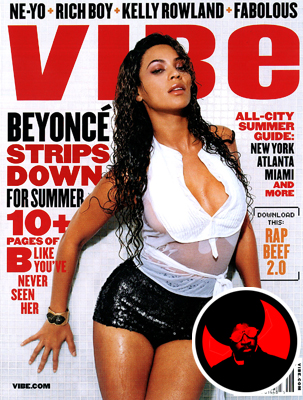 So it's official, Joey B. has been labeled a trouble maker and a whiner. It seems to me that some folks have started to blow this whole thing out of proportion, thanks a lot Vibe magazine for this garbage beef. Hopefully I can get some new music out of this.

I posted Joe's video earlier with his interpretation of the Vibe bracket. From what i could tell, the video was not created to knock any one individual but rather to mock the magazine's attempted tournament. I have to go with him claiming the list is bullshit. For instance Bow wow, Lil Kim, and Foxy Brown are all on the list and they don't write their own verses for the most part. Now back to Joe, He brought up Method Man, which is cool because at the very least it could be seen as a reasonable comparison, Meth is not the worst nor the best on the list. Due to the controversy, Joe went on Ed Lover's show to explain himself :

Shortly after, the Mr. Mef called in and spoke to Ed as well:

Now I must issue a disclaimer, I am a Joe Budden fan. I like his music and what he talks about because it's not all drugs, balling, and general stuntin'. I think Meth either skipped the video to the part where it said his name or didn't watch it at all. Now it's not like Joe was just thinking, 'I need to beef with someone how about Method Man', it was based off of Vibe's brackets so for Meth to insinuate that Joe did it because Blackout 2 is scheduled to drop is slightly ridiculous.

Secondly, Ed has just talked to Joe about how rappers always sya they want to get physical when they think they can't win on wax. Just like when you and your friend were playing Madden in 1995 and you were beating him so he says "You can't beat me for real though". The shit is annoying and very immature, so I wonder why Ed didn't say something when Meth gets to the end and says "I wanna see him in the streets" after Meth just claims he is willing to put the verses down and let the public decide. Thats what hip-hop is, and Ed failed by not talking to Meth the same way he spoke to Joe and in my opinion, he should have told Meth ignore the street part because it isn't that serious. This sin't Ja-Rule and 50. This is strictly hip-hop.

So I go over to Worldstar today and see this:

Why the hell is Melle Mel making comments? The dude said he was a pioneer, what more do you want? I mean really, dude must be on them roids all swole up on the internet. It's like as a pioneer, 50 year old man, should be above that and not come down to the level for something that is so childish. Then to draw a picture and call someone the ass crack of hip-hop...Is everyone getting dumber by the day?

The funny part is there are people that should be speaking about feeling disrespected, like Plies. I mean Too Short now has a reason to talk since Joe and Ed Lover both have said he isn't a lyricist worthy of the 6 seed. I agree, but there is a difference when you start adding in legendary status whihc isn't just based off of lyrics. That's what makes this Vibe tourney so bad, no one knows what the criteria is to even judge who made the list and where they were ranked. I can't believe this is getting so carried out of proportion- a new blog on that later.
Labels: beef best rapper ever bracket Grandmaster Melle Mel joe budden Method man sensit tournament Vibe magazine