Look this isn't anything new. In Hip-hop culture, cops are the enemy and breaking the law is just the way to survive, those are the rules ya dig. but honestly, not every cop is bad, just like not every person is good. So to classify every police officer as another 'pig' that needs to die is stupid to me. Now to call everyone in the hood a loser and throw them all in jail is just as wrong.

Why is it the only cops shown or portrayed in hip-hop the racist cops who 'don't understand' hood culture and who are conspiring to throw niggas in jail? Why is it that the only perspective in hip-hop is that of the criminal element? As an (aspiring) member of the middle class, I hope to one day own property and be able to have things without being robbed or having criminal activity occur outside of my door. It would seem reasonable that calling the police to curb the activity would make sense and that they aren't assholes just for getting the dope boys from the neighborhood. But then again, I'm asking hip-hop fans for reason.


Big example that always has nagged at me, at the beginning of Juicy, Biggie says "This goes out to the people who called the police on me when I was just tryna make some money to feed my daughter". The hip-hop community has learned to accept this as the rational decision and any opinion to the contrary is hating at best and snitching at worst. What about the hard working men and women who went to work every day to feed their kids and wanted them to live in a safe neighborhood and weren't too happy by the junkies, crack vials, prostitution, and theft all associated with Biggie's crack game. It seems almost criminal, that the only acceptable path to success in hip-hop is to start in crime.

Now I don't want to see a bunch of comments about how the only success shown in the hood is that of the crooks, because there are plenty of hard-working people in the community and traditionally there were even more shop and business owners to be role models. Just look at Rick Ross who names himself after a criminal then compares himself and attempts to be other criminals like Big Meech and Larry hoover. What's wrong with being someone positive and emulating them?

Back to the police, I don't think I know one person who doesn't know at least one cop or one person who is going through the process of becoming a police officer. Just as many drug dealers are not just pure terrors for the sake of being terrors, cops are the same way. A job where people constantly disrespect you and there are attempts made on your life for doing that job and you wonder why police have a certain attitude towards suspects. There are more reasons than just being jerks why they have to address situations in the way they do. 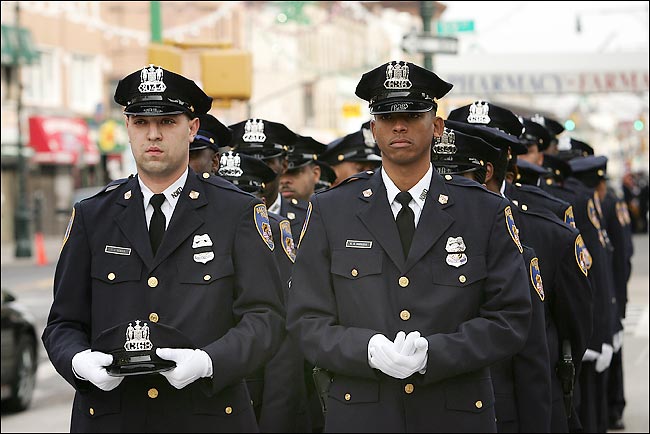 One of the worst things that piss me off is those people who say the only good cop is a dead one piss me off. Those are the people whom I hope something bad happens to. These are people as well with families and they generally are trying to do something good for the community, which you cannot say about anyone who deals in drugs, pimps hos, or is a thief.

You see the idea that all police are racists and trying to hate on you is passe and it needs to be changed. Honestly, there needs to be outreach on behalf of the police and the neighborhood and hip-hop artists need to be more of a bridge to that. Look at how many of them have off-duty police on their payrolls as security yet at the same time they're denouncing them on stage.  That shows even more hypocrisy as these big artists are telling you, the public, one thing while living another life, yet when shit hits the fan, you are the ones that pay for going along with these ideals.

Do i expect rappers to start making songs about how they love the police, no. However, I could use someone to step up and act like an adult and stop portraying all cops as if they are the agents of destruction leashed upon the urban community.
Labels: Biggie brutality Conscious cops corruption discussion hip-hop Krs-one police realism reality Responsibility