So i was perusing the hip-hop magazines at the market, cause I refuse to pay for these ass kissing editors and writers; and this month's Source featured the power 30 issue. I generally don't have a problem with them doing this, I'd prefer if they dig into the details of this more during the year and really dig into what makes these people worthy of being the barometers of hip-hop success.

This became an issue for me because as I looked at the top 10 and I see 4 or 5 entities that are closely related to one another and I am left to wonder who really is making the big money decisions and who should get credit. For instance, number one this year is Jay-Z. Not a big stretch of the imagination to have him there he is the top rapper, biggest name and most marketable commodity. However, Im 100% certain that some of his accolades come from having Kanye West in his camp, that's also fine if he is making major decisions in Kanye's career.

However, also in the top ten are Kanye West himself and his managers, "Hip Hop Since 78", made up of Gee Roberson, Kyambo 'Hip-Hop' Joshua, and Al Branch. They also manage Lil Wayne and Drake apparently. Hoaving that much power should get them on the list, however, if they are in the top 10 off of those names, then how did Baby and Slim of Cash Money make it into the top 3 and Wayne and Mack Maine of Young Money make the top 6 as well?

I'm not going to say that none of these guys are involved but there is no way everyone can get credit for the same thing. Give Kanye credit for being Kanye, making beats and generally keeping his name in the news while running amuck and for getting GOOD music off to a good start. But you have to take some of that away from his management. If you're gonna give Wayne credit then Baby and Slim can't get credit for making the same decision that Wayne and his management have made you understand? There can only be one boss, and some partnerships you have to have multiple signatures but at the end of the day you make one phone call to get shit done. In congress you go to Nancy Pelosi to get people on board and she has the weight. 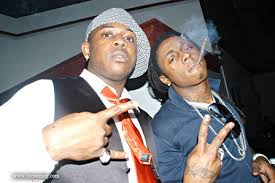 Then looking at Cash Money- who the hell is even on that label? How do they get credit for Mack Maine's work with Young Money if their only artists are Wayne and Baby but Wayne is also the lead on Young Money. It just doesn't make sense. That's why I need to see some criteria. It seems like once again the hip-hop media is playing to the emotions of tough guy artists and business men.

I'm sure some of the rankings are accurate but I really need to see a documentation of what some of these guys are doing to believe they really are powerful. Other questions I had were about Snoop being in the top 20 when he hasn't broken another artist ever, isn't acting much and isn't a business presence as much as some of the others. Soulja boy at 22 could be accurate but he's an idiot like Baby just lucky. Check out the power 30 and let me know what you think of the list.