One of my favorite blogs right now

So i have been scouring the web looking for hip-hop blogs that are more like my own, an opinion or independent idea and not just a re-posting of the same gossip and rumor that you find everywhere. Thus i ended up at The Big Ghost Chronicles .

Now I'm not going to say whether or not this blog is by the man the legend himself Mr. Toney Starks aka Ghostface from the Wu Tang Clan but this guy does write somewhat like Ghost could though I'm not sure Ironman would be so forward in his hip-hop criticism. It doesn't really matter because there are some true gems within this blog, starting with his Annual 10 Softest Niggas in the Game . I'll tell you what, if you're a Drake or Wiz fan or you like any of these new Emo rappers, don't go unless you can handle the pressure, because the big homie brings the pain. Just look at this excerpt:

Speakin of white dudes wit cornrows n braids....Nah ya eyes aint deceivin you par...If you aint never hearda this cornball ass muthafucka before its probably cos you dont hang out in trailer parks or search "WACKEST SHIT ON EARTH" on google enough namsayin. Son....we was mad at Vanilla Ice back in the 90s yo. This muthafucka is like the T-1000 version of Vanilla Ice my nigga. Newwww.....Improoooooved Vanilla Ice. I quit. I never thought I was gon see a white boy coon this fuckin hard EVER son. This muthafucka musta been injected wit the blood of Soulja Boy in his sleep yo. Son look like he a failed experiment that was designed by the government to spy on niggas in Magnolia Projects n shit....in 1998. The level of wackness this muthafucka capable of could probably make Fubu visors rain from the sky b. This muthafucka could probably cross his arms n blink n have you wearin a G-Unit sweatsuit without you knowin it son. Look at this cracker son... 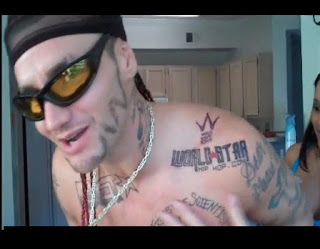 Not only did this powder coon get a MTV logo tatted on his neck...but he actually got a BET logo n a World Star one to go wit it. On his actual flesh son...FOR. EV. ER. Nah yo...fuck this cracker, fuck his pulse, n fuck his heartbeat....fuck his moms, his kids, his unborn...I dont give a fuck yo. I dont be wishin death upon nobody but this muthafucka need to die son.

This is classic material right here and there is more where that came from. For instance, his album review of the Carter IV had me on the floor crying laughing. I can read it write now, knowing all of the jokes and still bust a gut with laughter. It's been hard for me to truly find blogs that have a unique identity and this is one of the best.
Labels: Big Ghost Big Ghost Fase Ghostface mtv Riff Raff Staten island Wiz Khalifa wu tang