Now for those of you young heads out there who might fall into this blog mistake, you need to know something, and it's this M.O.P. will stomp the shit out you. 95% of rappers are true frauds or actors for lack of a better term and the other 5% is real and just sucks, except for M.O.P. . Lil Fame and Billy Danze have been around the block and back, through several labels and popularity cycles in hip-hop. Through the entire time, they have been the same Mash Out Posse, hardcore to the bone and the true kings of the street in my opinion. Nevertheless, I was still wary about hearing them yell about how I would get stomped out, mashed, and treated by real niggas from the street. But, this isn't quite the normal bruising M.O.P. . They are an older, matured group. 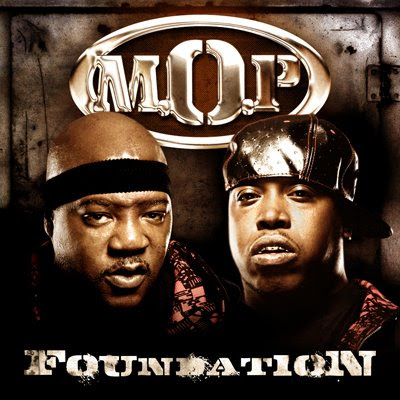 Don't get it twisted, M.O.P. will still bash your head in and throw in a "mothafucka" just so you know who it was who did it to you, but this album shows actual growth from the duo. Need an example, check out "Blow the horns" which exhibits their energy while toning down the yelling just a notch yet remaining at a level to get their point across. This ain't for Kanye West fans folks. "Stop Pushin" keeps the volume amped up to just a ten instead of the normal 15 but it's still got enough caffeine to hype anyone up. But the newer M.O.P. drops in on "Street Life" which features Demarco. Now Fame and Danze aren't ever going to be confused with any of the best orators on wax but trust they get their point across. The title track, "Foundation" lets everyone know that the Posse still holds it down in the streets and they have an intention to bring back hardcore NY hip-hop. I'm not mad at them. Jay-z could have used some of their anger on Blueprint 3.

Features are relegated to Termanology who puts in servicable work, Styles P on "Bang Time" another classic M.O.P. joint, and Redman pushes the best lyrics out of Fmae and Danze on "Riding Through".

Honestly, some of these reviews have a lot of adjectives I try to use to give you an understanding of the feel. This one is straight forward, M.O.P. makes the type of music that gets people hurt in clubs and the Foundation is no different. This hip-hop isn't for everyone but this is what I was expecting Maino to bring to the game. Hip-hop still has hope.