Few people outside of a small area around Atlanta are Playaz Circle fans. Titi Boi and Dolla are more known for their names than their music even though they had a real hit single two years ago with Duffle Bag Boi. However, the song garnered more attention for Lil' Wayne's hook than anything the duo did on the song. Back with another album that you probably weren't aware of is Playaz Circle, don't worry though, you're not missing much.

The theme of Flight is front and center throughout the album where on just about every song mentions some lame punchline about a plane or being high. Honestly, these guys are a wonder to me. They must have held Luda down to get on because they don't possess the talent or personality to pull off being rappers. Every song is about balling and how much swag they have and they also mention "Duffle Bags" on every single track. We know that was your song but come on, you cannot live off of that forever. 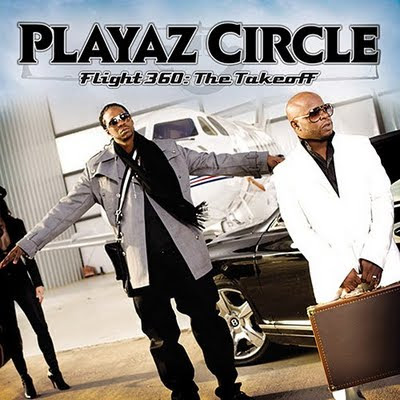 Even their few attempts to do something different fail miserably like on "Hold Up" where they eschew the traditional verse structure to try and be different. The beat knocks but the quasi-chorus they use becomes annoying after the first time you hear it. The lyrics of course, don't even begin to help. Ludacris trys to help on the oh-so-original song "We Gettin Rich" - yawn. Young Dro also shows up and offers up - nothing, as do Cee-Lo and Raekwon. They also try to recreate their only hit by getting Wayne to do the hook for "Big Dawg" which is even more annoying than Duffle Bag Boi. It gets really bad on "Stupid" where you realize you are actually looking forward to hearing OJ da Juiceman just because of the dumbass noises he makes. When that happens quit rap for real.


The features may not have been a-list efforts but why would you when you have to compete with lines like:


Look I understand some people like "Trap Music" but this is terrible. These two have no personality and use every current cliche in music on an album that wont ever crack rotation. So why not at least try to do something different than rap about how money is the only thing you think about and your lame "swag". This is what kills hip-hop, people who shouldn't be in the game who waste time, money, and beats just because they know someone. I'm sure Luda could have found something better for them to do other than waste studio time and resources. Please don't buy this album.