So for a while it seemed as if the entire G-Unit movement was over, save for 50 Cent holding on to his major label deal. Bansk and Yayo were dropped, Game was pushed back and damn near out and Buck is in contract purgatory. Then Banks hit pay dirt with last winter's "Beamer Benz or Bentley" and got  a buzz going behind him. Finally, after negotiations, he is ready with his third solo album, "Hunger For More 2". 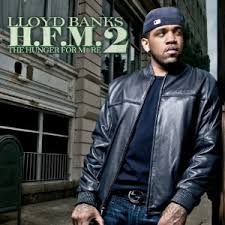 So I always thought of Banks as Fabolous with better albums but worse singles., because Fab's albums are wack yet they are similar artists. This new album begins with "Take em to War" which features a verse from Tony Yayo. Though the verses are solid, they don't go with the chorus at all and you immediately notice that Banks has a different rap voice and flow than before. Same thing for "Unexplainable" with Styles P though it makes slightly more sense. This repeats itself once again on "Home Sweet Home" with Pusha T, but Banks says nothing that relates his verses to the theme of the song and Push once again shows why he is one of the most slept on artists today.


On "Payback" which has a 50 Cent hook, Banks attempts to use the same type of verses to describe how his success is a payback. Nope, it doesn't make sense to me either. Ryan Leslie handles the chorus on "So Forgetful" which is a chick track that features one of the most annoying Casio keyboard riffs I have ever heard. The premise of the song is that he deals with too many women to remember just one. One of the better hook/verse combinations is "Father Time" where Banks talks about he hopes to have enough time to make it where he wants to be. "Celebrity" with Akon is another generic song about how fly Banks is. "I dont deserve you" with Jeremih is decent, but party song "On the Double" sucks.

The three songs that stand out as the tentpoles for the album are "Sooner or Later" with Raekwon which is a typical hardcore rap song, and the singles "Beamer Benz or Bentley" and "Any Girl" which feature Juelz Santana and Lloyd respectively.


I saw someone tweet that this album is Banks' best work to date. That person must be smoking that good stuff. This is not a worthy sequel to Banks' first offering at all. The verses don't show the same hunger nor lyrical sharpness and combined mostly with hooks that don't correlate to a cohesive theme, this album is a real disappointment. While he was able to strike gold with his two singles, the album suffers froma  lack of direction and the mix tape mentality.